In 2018 I decided to tackle L’Etape. I’d already had a shot at it in 2017, but this time I decided to employ a different training strategy:

I’d heard about it and knew professional athletes used it, but I had no idea how it worked, why it worked or how to do it. Fortunately I was in good hands with the guys down at The Altitude Centre.

Here’s what they have to say in regards to altitude training and endurance performance in sport:

The common belief in regards to altitude training is that by living and/or training at an altitude (2,000-3,000m) where the oxygen levels are lower it forces the body to produce more red blood cells which carry oxygen around the body.

There are other reported benefits, too, but I’m no scientist so I’ll leave that out for now.

From what I’ve read, having higher levels of Haemoglobin will mean being able to transport more oxygen around the body. From the blood tests, therefore, I am mostly interested in the following:

However, as I’m not a doctor maybe I am missing something? You’ll see below that all three values increased after altitude training.

And in this post I hope to help give you the answers to those questions. 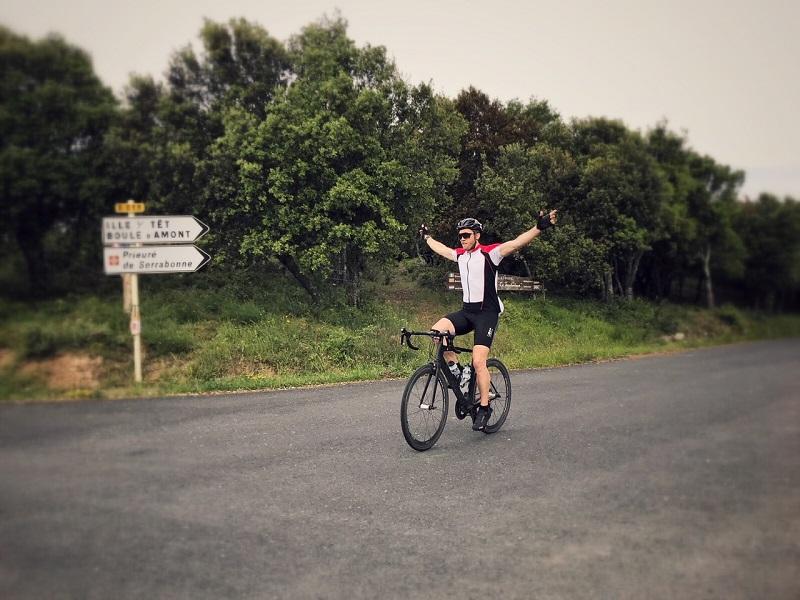 Across the finish line

Let’s get started with the training schedule…

I wanted to use three ways:

Note: I’d love the opinion of a qualified doctor or sports scientist who knows how to interpret the results from my blood tests. Contact me if you are one or know one who would take a look, as it would be very interesting.

But before we dive into the detail…

A quick note about the type of training sessions which I undertook at The Altitude Centre.

The sessions were 30 minutes long and very high intensity. For example, we’d regularly do the following style of workout:

The format would vary, with various lengths of work vs recovery periods, but the style would remain fairly consistent. Very high intensity work periods with short recovery periods.

We would also add some 3 minute efforts in there from time to time.

I trained at the altitude centre 2-3 sessions per week (60-90 minutes total). Often I would do back-to-back sessions in one day.

Key factors in the training plan

There were two significant advantages of training at The Altitude Centre:

It’s fair to say that I would not have been able to push myself as hard without the help of the trainers and the pressure/camaraderie of working alongside other people.

OK, let’s now take a look in more detail at the three points I listed as to how I’d determine the effectiveness of the training.

4DP is a great test. The old traditional FTP test just tested your ability to hold power for 20 minutes. Whereas the 4DP test gives you an insight into your 5 second, 1 minute, 5 min and 20 minute power.

It’s done in the same sessions which is 1 hour long, so it’s very tough. As a result, I only did two FTP tests. The first one in November 2017 and the second one in June 2018.

Note: During June I spent 1 week in the Pyrenees riding the Raid Pyrenees so I’m sure that helped with my second 4DP test too.

Ideally I would have done another one before the altitude training sessions in March but I didn’t so we’ll have to work with what we have. Here are my results from both tests:

Here’s how that looks in terms of percentage gains:

Not too bad I don’t think, especially seeing as I wasn’t going crazy with the training.

As I mentioned earlier, however, ideally I would have carried out another test in March before I started the altitude training sessions.

Although I use heart rate monitoring, train with power on the Wattbike and track my rides using a Garmin, I also like to ride by feel. Sometimes you know what your own body is capable of in a given situation and that can mean ignoring the numbers from time to time.

I regularly ride the same route with my club, London Dynamos, on a Saturday which is 3.75 laps of Richmond Park. There are a couple of small hills.

I’m 100% sure that as I trained more in the altitude chamber, I was able to recover faster from max efforts getting up the hills. I’d hit a high heart rate of around 175bpm, then recover quickly when over the top. Previously I would have been suffering for a lot longer.

This meant I was able to keep my average HR down and get moving faster again in a shorter time.

I don’t know if the improvement was down to the altitude training or just because I was training very intensively. It’s pretty much impossible to work that one out.

I have a stomach condition called ulcerative colitis, which means that I get regular blood tests to see if there are potential changes and problems.

So I managed to get them taken in March and June. Here are the results from that:

Note 1: I had the 2nd blood sample taken 3 days after I returned from a week in the Pyrenees. The altitudes we stayed at were low and the highest we rode up to was 2,115 metres on the Col Du Tourmalet.

Note 2: Perhaps my ulcerative colitis could have impacted some of the results.

It feels like you just can’t get enough air in to support how hard you’re trying to cycle. For the first 3-4 sessions it was the same.

So, let’s see if I can answer the questions I originally proposed at the beginning of this post.

1) Does this work for slightly trained amateur cyclists (me)?

I believe it does, yes. Whether I would have seen the same results from doing the same training at sea level I do not know for sure. But I have definitely improved and I believe training in the altitude centre helped me a lot.

2) How often would I have to train to see improvements?

For me to see the above improvements I did 1 long ride every 1-2 weeks, usually 1 shorter ride and 2-3 altitude training sessions. I also maintained some weight training sessions, probably around 1 per week on average.

So with around 10 hours a week you should see some good gains.

3) What kind of improvements would I expect to see?

I’d say this probably depends on where you’re starting from and would be specific to each individual as everyone’s body responds differently to training. I saw a 10% increase in my key power outputs. But they weren’t too bad to begin with.

I imagine if you started at a lower level the improvements would be greater.

4) What could I measure to determine if it had worked or not?